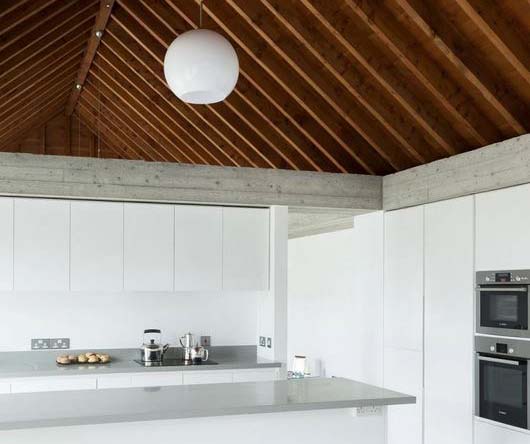 When we think about the design of our homes, we are usually drawn to thinking about it in terms of the house plan, a two-dimensional way of working out the spatial organisation of our house. A plan is a representation of a horizontal cut taken through the walls at about one metre above the floor plane, looking down. A well-considered plan is vital in order to work out how rooms flow into each other, the orientation in terms of sunlight hitting the building, and proper functional organisation. Sometimes though, we forget to think about spaces in three dimensions, and the potential magic of a space can be lost. Vaulted ceilings, angled ceiling planes, and generous ceiling heights can all add immeasurably to the character of your home. We’re used to having bedrooms hidden in the attic spaces of our homes, but what happens when we expand living spaces upwards into the eaves of our homes? Here we look at some different ways of treating ceilings and how they can be designed to define and enhance the character of our homes.

Leagaun House by Ryan W. Kennihan Architects is a very simple, relatively minimalist house. White walls, exposed concrete ring beam, and a concrete floor are brought to life by a warm but impressive unbraced vaulted timber ceiling in the main living spaces, adding immeasurable character. In the small snug however, the ceiling is on a flat plane, with the lower ceiling creating a greater feeling of coziness and warmth. In spaces such as these, in which the ceiling defines the aesthetic of the room, it’s important to carefully consider the position of light fittings, smoke alarms etc, all of which could compromise the overall look.

A more pared-back example is The Baron House by London architect, John Pawson. The vaulted ceiling is finished in the same plaster and paint as the walls, creating a very pure and minimalist approach. Such a large, open plan space demands a higher ceiling than normal to give a more harmonious proportion to the room. By removing the ceiling joists and allowing the volume to expand right up to the rafters, generosity of space is created without actually increasing the wall height, which is a cost-effective method (but obviously still more expensive than a regular height, flat ceiling!). Note how the ceiling planes are completely clear of any fittings or fixtures, except for the strong statement light fitting hanging over the kitchen island.

As well as the form of the space, the materials used also define the character. The Grand-Pic Chalet by Appareil Architecture has a similar form to the example above, but is lined entirely in plywood, creating a very modern cabin feel. Similar approaches are also used in more traditional style homes, such as the home below designed by Walker Warner, which exposes a traditional timber truss, a common structural element in both residential and agricultural buildings. The effect is a nice balance of contemporary and rustic, while the rooflights above accentuate the structure, and bring light deep in to the room. Again, the high ceiling is crucial to maintaining a sense of proportion in the large open-plan living area.

Rooflights and high-level windows can bring an extra dimension of space and light to living areas, affording us enhanced quality of daylight throughout the day. Light from above allows us a greater sense of the changing color temperatures of sunlight from morning to night, thereby reinforcing our natural circadian rhythms, and helping us to sleep better at night. Having views of the sky can greatly enhance our well-being by enriching our awareness of climate and creating limitless views.

Monopitched ceilings, or ceilings that slope in one direction only, appear as though the ceiling is lifted to allow light in from a particular side. This gives greater control for enhancing sunlight from a particular direction or for emphasizing an exceptional view. Monopitch ceilings often give rise to clerestory (high-level) windows, that can either highlight the openness to one aspect, such as in Bush House by Archterra Architects, or can be used to pull light from another direction, as Neumannhaus / ITN Architects have done in this house in Melbourne. This is a particularly great trick to employ if your best views and best orientation are at odds with each other – simply steal light from above!

So no matter where you are in the world, the orientation of your site or lot, or the style of home you’re dreaming of, consider what happens above the plan. You may not be competing with the Sistine Chapel, but carefully considering ceilings, high windows, and rooflights can really add the ‘wow’ factor to your living spaces.

The Opoplan suite of technology products has been created to improve the pre-build design and planning process for professionals and consumers, in the single family homes market.