Beyond the Hall Door 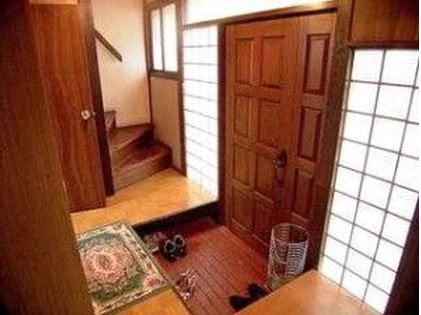 How to create the right kind of entryway to your home

All over the world, the entryway or front door to the home is treated with some tradition and reverence. The entrances to our homes demand special attention for a few reasons: the practical aspects such as security and privacy; creating a welcoming experience for visitors; and, somewhat less tangibly, marking the distinction between public and private. In the world of architecture, we sometimes refer to this area as the threshold, and its treatment is typically related to culture, with homes in particular parts of the world tending to be designed in the same way, without much consideration beyond the norm. When designing a new home though, you have the opportunity to step outside the status quo and create an entryway that aligns with your own needs and feelings. There are so many ways of designing an entryway, and its success always lies in striking the right balance between linking and separating inside and outside, public and private. Ultimately, the right balance is a very personal thing, so we want to fuel your imagination with some great, and very different, examples.

Up the garden path…The process of entering from the street or public sphere to the intimacy of the living space, can be very short and functional, or long and almost ceremonious. While a house in an urban Victorian terrace might have living space that opens directly on to a busy street, other homes are designed to emphasize the experience of entering, prolonging the movement from the public to the private sphere, through gardens, steps, porches, and hallways. Extending the threshold can give a signal to a visitor that they are entering a more private domain, and thus encourages them to alter their behavio to fit with being in someone else’s territory.

A traditional way of separating the house from the street is with a fence or railing along the boundary and a strip of landscaped garden that acts as a buffer zone. Commonly, the fence and gate allow some visibility through, by being either below eye level or slatted, such as in a traditional iron railing or a picket fence. While there is a distinct line to show the boundary, the lack of solidity allows for some security screening from within, while displaying a certain amount of openness to visitors. In many cases, a simple change of ground surface or the addition of some landscaping are enough to demarcate the boundary.

This kind of treatment is a middle ground, and often where there is a higher need for security or privacy, it is necessary to solidify the boundaries, by adding walls or more high or obscured fences. It is important to consider though how the openness of your boundary invites or discourages social interaction and a sense of community. Neighbourliness and potential friendships can be negatively impacted by unnecessarily dense boundaries. If you do take this route though, take advantage of some of the beautiful ways in which a strong entrance gate can open to reveal a treasure within, creating a sense of magic once you step in to the private realm. This might be through a small courtyard or lush garden.

Steps are another wonderful way of creating some distance between public and private spaces, slowing the movement of a visitor, as well as creating a potential place to sit and watch the world go by. Be mindful of accessibility issues however. Even if disability access isn’t a concern for you right now, consider your visitors and the practicalities of bringing buggies or pushchairs in and out.

Whatever the sequence of approach to your home, the design of the area at the front door is crucial to creating the feeling you want your home to convey. Providing some shelter from the rain while you get your keys in the door, or giving some respite to a caller waiting on you to come to the door, is always welcome. Large verandas are commonly seen around North America and Australia, providing shade in summer and shelter from rain, as well as being an extra space for lounging, teetering on the line of inside and out. In Europe, small porches or roof overhangs are more customary, seen simply as a quick refuge from the weather. These spaces though, are much more than that. They require that a person entering the home pause for a moment, allowing them to adjust to the character and status of the new space they are about to enter.

In Japan, a genkan, a small space inside the front door, a step lower than the main floor, acts as a break between public and private; it is a space to stand for somebody just stopping by for a moment, and a place to remove one’s shoes before entering the house proper.

Provide storage space for shoes and sippers, hats and coats, to keep this area neat and inviting. Whether or not you’re convinced about the benefits of Feng Shui, the philosophy advises against placing staircases or walls directly in front of, or too close to, the front door thereby blocking the energy entering the home. Likewise, it dictates that mirrors should not be placed facing the main door, as doing so reflects energy rather than allowing it to flow into the home.

Ultimately, the treatment of the entryway to your home should reflect how you wish to present your home to the world. The level of openness or separation will influence your social interactions with neighbors and visitors, so be mindful that it is designed in a way that aligns with how you wish to relate to the world around you. Consider accessibility, privacy, security, and shelter, as well as creating a welcoming space within which to adjust and reset to the private realm of the home.

The Opoplan suite of technology products has been created to improve the pre-build design and planning process for professionals and consumers, in the single family homes market.